What do George Davies and Steve Jobs have in common? 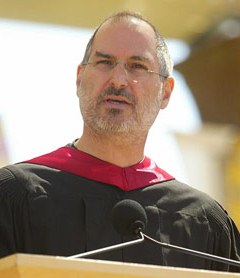 I am currently finishing Walter Isaacson’s biography of Steve Jobs. In the book, there is a quote from Jobs that is very much in line with something that George pointed out in Episode 1…

I grew up the son of an electrical engineer and was exposed to computers at a young age. My dad can tear apart any electrical device and quickly understand how it works. Because of this, I grew up with computers that were then known as “IBM Compatible” and are now known as PCs (it didn’t hurt that I grew up 30 miles from the headquarters of IBM’s personal computing division).

As I became older and started building my own computers I learned to detest Apple Computers, Inc. In the mid 1990s, I would enjoy picking out each computer component myself and then head home to build the exact computer that I wanted. I couldn’t do that with an Apple.

Apple computers at that time were closed systems, way underpowered, and way overpriced. Don’t get me wrong, Windows was crap, too. But at least you could crack open a PC and hack it how you wanted it, somewhat. Especially if you went rogue and used a UNIX-based system such as Linux. (For more info on the state of operating systems in the late 1990s, read Neal Stephenson’s well known and excellent essay on the subject, or read the synopsis)

Then Steve Jobs returned to the company. A man who was widely known as a self-absorbed, condescending, arrogant jerk of the highest magnitude. (Although that reportedly never changed, I learned later that he was also brilliant and usually right.) Their products continued to have the reputation of being more style than substance. At that point, I ignored everything coming out of Cupertino.

I was always frustrated with the untapped capabilities of cell phones. I remember back in 1998 going to the Sprint store and asking for an adapter for my phone that would allow me to plug my computer’s modem into it in order to connect to the internet via my cell (this was in the days of dial-up internet). It seemed simple enough to me. I was so sure that it existed that I had disconnected my land-line already. Of course I was horribly wrong.

Years later I was at a crossroads. I never saw the need to pay for a cell phone since the free ones that I could pick with my plan were no less of a piece of junk than the fancy expensive ones. The day came when I had to get a cell phone that could get email when I was away from my home and office. I was going to get a Blackberry.

At the time, there were many different Blackberries from which to choose. They all left a bad taste in my mouth. In my mind, they were too expensive for what they were. Then one day I was hanging out with a surgeon in the OR. In between procedures, he was messing with his phone – the newly released iPhone.

As I said before, I had an aversion to Apple products. However, this thing was really cool. I went online and watched the demonstration at the Apple website and was very impressed. I bought the phone. A few months later, I got to know George Davies at an AOSSM conference.

As I say on the podcast, I had a rental car at this conference. Why? Because I couldn’t afford a room at the conference hotel and was staying miles away at some dumpy motel. So I had this cheap rental car. It was noon and Rob Manske and I were going to get lunch. Rob asked his roommate to join us. That was George.

We were sitting at a table at a simple family-style restaurant and I was terrified that I would say something stupid or inappropriate in front of George. As nerds will do in a stressful social situation, I pulled out my phone and avoided eye contact as Rob and George talked to each other.

Rob got up to use the restroom and George says to me, “What’s that?” Since I was so amazed by this phone, I very excitedly showed him all of the features like visual voice mail, the virtual keyboard, Google maps integration, the iPod interface, and a real web browser (this was before the days of apps so that was all it really did at the time).

I had just taught something to George that he had never known before. I was so startled by this revelation that I dropped the phone on the floor as I was putting it back in my pocket. When Rob came back, George had me show the phone to Rob. Today George uses an iPhone himself and credits me with the introduction. I’m still waiting for my commission check from Apple for the sale…

So what does this all have to do with Jobs and Davies having something in common? At the very end of Episode 1, George mentioned something interesting. Since we were out of time, he didn’t get to elaborate much on the statement, but he did stress the point emphatically. He mentioned that the thing that most often holds people back is a fear of failure.

During Steve Jobs’ wonderful 2005 Stanford commencement address he too talked about the fear of failure:

Remembering that I’ll be dead soon is the most important thing I’ve ever encountered to help me make the big choices in life, because almost everything – all external expectations, all pride, all fear of embarrassment or failure – these things just fall away in the face of death, leaving only what is truly important. Remembering that you are going to die is the best way I know to avoid the trap of thinking you have something to lose. You are already naked. There is no reason not to follow your heart.

I have nothing more to say…